Since establishing in November 2015, BadRhino has become one of the fastest growing brands in the Mens Big and Tall market – doubling market share within the first eight months.

Badrhino.com has seen 120% YoY growth and has franchised into 9 dedicated stores. Each month BadRhino acquires 1000+ new customers and has a highly engaging and growing social media presence.

The brand has an experienced team driving it forward and Senior Menswear Buyer, Mark Humphries (Previously Arcadia Group, George and Next) cited, “1 year on we are beginning to see the benefits of everyone’s hard work and endeavor. Customers (and staff alike) online and in store are loving the brand and that’s the biggest complement you can get!”

Earlier in the year, Drapers published an article which stated, “The plus-size man is virtually invisible. While the “curvy” champions of plus-size womenswear gain prominence, there has been an obvious dearth of role models or “faces” for their male counterparts. Until now.”

This is a true reflection of the market for BadRhino and it has been a personal goal for the team to challenge this. The company ethos is to represent a true to life big/tall male and the brand became publicly exposed when the media picked up the signing of (The World’s first brawn model) Zach Miko, as the face of BadRhino.

“There are very few brands that make big guys feel stylish and confident and I always feel that way when wearing Badrhino. Shopping as a big and tall man has always been a nightmare, it’s great to have a brand where that isn’t the case.” Zach Miko.

Since, the model search competition #BADRHINOMAN has enabled the brand to recruit more than six real, down to earth, big and tall men for their campaigns. Including postman Alan Glynn and more famously, Ben Whit, the UKs first plus-size male model.

Over the past year, BadRhino has worked with key influencers such as football legend Razor Ruddock, celebrity stylist Joey Bevan and Game of Thrones star, Kristian Nairn to name but a few. Overseas in the United States, BadRhino has a strong relationship with bloggers and owner of Chubstr magazine, Bruce Sturgell.

Going forward, BadRhino is set for continued growth in-store, online and internationally. BadRhino will also continue to promote the equality of the Big and Tall model amongst the mainstream male model industry.

Resh Dorka, Managing Director commented, “The last year has been very exciting for Badrhino and we expect to see a continuation of this. The team have all worked extremely hard to grow the brand and we are looking forward to seeing what the future holds.”

So we can email you news, updates, special offers, and discounts 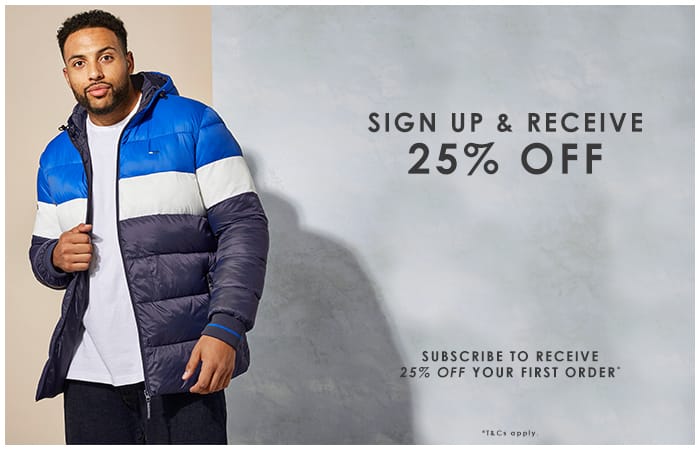